Well, back into the swing of things as best we can while Terry is away. The dynamics are always a little different when Terry is not here for more than an overnighter. The school days seem to drag because they don’t come to a neat close with Terry arriving home in the late arv etc. Dinner is a little lazier… toasted sandwiches may have been had on one occasion. LOL.
Yesturday was a FULL-ON school day with 7 tests in total across the 3 kiddos. All with great results which is always great to see. Last week was a little all over the place, so it’s great to get back into the set routine this week. Too many outings, especially in the morning, really throw a school day into caos.
Music has always been a big part of our school day… today and yesterday has been nothing but music from the movie Frozen… I don’t mind, but it does make for some amusing moments in the schoolroom. Jordan will be discussing something in his science pace, and then suddenly he’ll start singing… Wanna build a snowman? LOL

I have always believed that music is an absolute gift that God has blessed us with… it’s just such a great addition to any day. Even when the sing is about People smelling better than reindeers. Bahahahaha !!!
It’s my 38th birthday t’row… weird concept as I don’t feel anywhere near that age. Tyler-Jasmine has just headed out with Nanna to undoubtedly do some b’day prep. I love how Jaz has a heart for birthdays, just like mine, and sees the importance of the day. I so love making a big deal out of the kids and Terry’s b’days. after all, it’s the only day of the year that’s all about you. It’s the day that God especially choose for our earthly journey to begin. I’m pretty down about Terry not being here for it to be honest, but oh well, can’t be helped. There’s always next year.
We have a new dog named Bella. I got her to have a guard dog while Terry was away, but she has turned out to be a healing wonder dog. Getting over having to say goodbye to Milo has been that much easier with Bella here… and I even think that it has provided healing from losing Mindie last year also. Awesome how God works !! 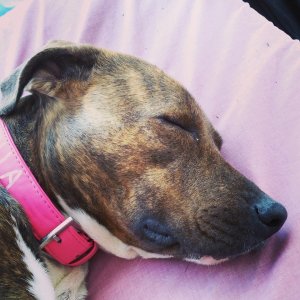