Ekka – Where the country meets the city !! 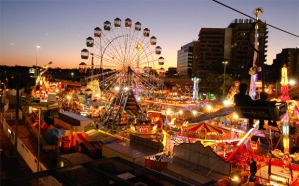 Yesturday (Sunday), I began the day in the BEST way by heading to church.  It was a fantastic service, made even better by the fact that a dear friend was visiting our church.

Straight after church we took said dear friend, headed to collect another and then made our way by train into THE EKKA !!!!

For those blog readers outside of Australia, The Ekka is the affectionate name for The RNA show. (The Royal National Agricultural Industries of Queensland), also known as The Royal Queensland Show. …  where the country meets the city.

People come from far and wide to show their cattle, chickens, sheep, goats, horses, dogs, cats, fish (yes, I said fish), snakes, alpacas.. and basically any other animal you can think of. 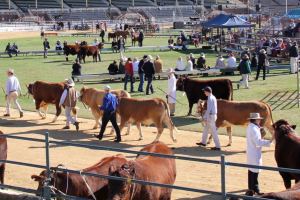 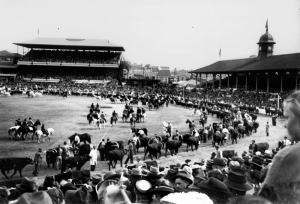 Here is a little bit of Ekka info….  Bowen Park was chosen in January 1876 as the site for the first Show. The park covered 6.8 hectares bordered by Bowen Bridge Road, Gregory Terrace and a creek which ran through the middle of what is now Main Arena.

The ‘Intercolonial Exhibition of 1876’ was held from 22 – 26 August. A public holiday was declared and on opening day 17,000 people attended – a colossal success, given that the total population of Brisbane at the time was only 22,000.

Men attended in their suits and ladies in their finest garments. Food was served on long tables and the first showbag – a bag of coal – was free for all visitors.

The first ‘Royal’ Show was held in 1921, when the Association was granted the prefix under warrant from His Majesty King George V.

Since then, the shortened name “Ekka” has replaced “Exhibition” in the Queensland vernacular, indicating locals’ affection for the Show.

Ekka has since been held every year with only two exceptions. In 1919, Brisbane suffered a Spanish influenza epidemic, and in 1942 during wartime the Showgrounds were used as a staging depot for troops moving north.

Today, Ekka runs for ten days and attracts about half a million visitors every August. Ekka is famous for its mix of entertainment, agriculture and education. From Champion Rooster of Show to the glamorous fashion parades, Ekka has always celebrated the rural and the urban; the traditional and the innovative, and it’s for this reason the event holds a special place in the hearts of Queenslanders – as it has for generations.

Another juicey bit of info about EKKA… it costs a LOT to take a family (hence why we took our kids to the smaller cheaper Pine Rivers Show last weekend and I just went with girlfriends to the Ekka…. but don’t worry…  I got them showbags.  LOL)

After getting off the train at Exhibition station, our first stop was to acquire a locker…  the lockers are like gold at the Ekka, and go very quickly.  It makes a huge difference to the comfort of your day if you can get one and not have to carry EVERYTHING around with you all day long.  However, we did learn when we came back for a drop off to your lockers that it cost $2 EVERY time you open the door.  What the??  Oh well, it’s not a huge amount, and definitely worth the cost.  Might just need to remember that for next time so we don’t get a locker until AFER visiting the showbag pavilion.

Our first major stop was the Woolworths Fresh Food Pavillion.  LOTS of taste testing opportunities (& some cheap lunch options too with a cheese toasty for only $2).  I however, decided to try a bagel.  It was called the B.R.A.T… Bacon, Rocket, Avocado & Tomato.  It was DEEEE-VINE !!!

One of the BEST things about EKKA is the things to see in the Main Arena… both through each day and into the evening.  I LOVE the woodchop.. but sadly missed it this year, at both shows I went to.  :0(  The fireworks display is always amazing.. and last night did not disappoint.  They also had monster trucks, ATV display, as well as motocross, singing and dancing performers etc. 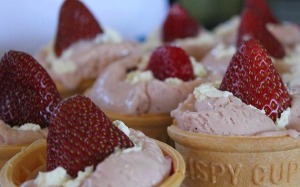 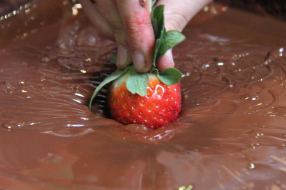 Ekka is also great for the FOOD !!!  There are two Ekka staples as far as I’m concerned, and strangely enough, I didn’t have either yesturday.  First on the list is a strawberry and cream ice-cream .  DELISH !!!!

Second one is a dagwood dog, which one of my girlfriends kindly had on my behalf.. LOL.  I must say I don’t normally have one quite that large, but hey, it seemed like a good idea at the time.  It’s only fair that I mention that she didn’t consume this entire thing. 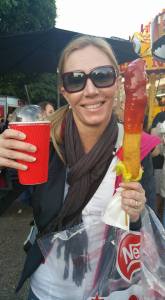 Another rather expensive part of EKKA is sideshow alley, which we didn’t do at all yesturday.  I’m not a crazy ride person anyway, so it didn’t bother me in the slightest.   The exciting purchase I had been waiting all year to make was these gorgeous UGG boots !!  I’ve actually never owned REAL sheepskin UGG boots before, I’ve only had the cheaper ‘rip-offs’.  Even the rip-off versions lasted me 20yrs, so I think these boots may very well outlive me.  ha ha.  I got them for an absolute bargain of $130… they are $219 advertised on their website if bought outside the show.  I def had toasty warm feet while sitting in the main arena in the cold of last night. 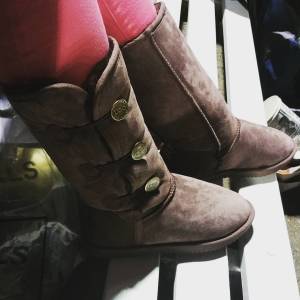 Yesturday was the first time I had been to the Ekka ‘kid free’ in a VERY long time, so it was very nice to spend this lovely day with girlfriends.  The only sad part of the day is that until a couple of years ago, you could walk right through the cattle pavilion… right past all the stalls and see all the cattle (well, mostly their butts really).  I’d say maybe they thought it was too dangerous to have the public walking through there.  Very sad though as it was my favourite part. Some of those cattle are just sooooooo big.

And now, on the following day, I realise just how much walking I did as my feet are sooooooo sore… not to mention my shoulder from carrying the backpack.  Totally worth it though for the great day I had with 2 treasured girlfriends.

OK… I hope you enjoyed my little Ekka synopsis.