Waking up in the Netherlands on Friday was surreal… as was waking up in Paris….  I never thought I’d visit ‘Holland’ as I more knew it as…  but in the days ahead I was to fall in love with this beautiful country.

As our ‘cousin’ Sandra has Fridays off, we got the guided tour of Utrecht, as well as some of the other areas near Nieuwegein, where they live.  To say that Utrecht is gorgeous is a serious understatement.  The sheer history in this city simply takes your breath away.  There is a canal that runs through the city, and this was one of the first things we saw after the short walk from the train station.  I pretty much felt like I was in Venice.  lol.  The canal itself is so pretty, but the buildings that rise up from it, the bridges that cross it etc…   just beautiful. 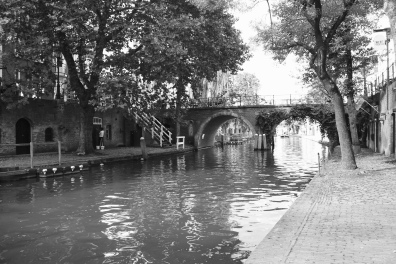 Sandra took us to a really lovely Cafe for lunch.. Anna’s lunchroom.  It was so quaint… even the flat & glassware were gorgeous.   I’d already experienced the steep stairs (aka ladder) at San & Richard’s, but when I went to go to the bathroom at Anna’s, they honestly seemed even steeper and narrower…  and you had to go DOWN them.  Thankfully I made it down and back up without incident.. but it was interesting to say the least.  The food was fantastic too, as it was a cafe more on the healthy side of things.  aka.. my kinda lunch choice.

We also enjoyed a really lovely canal cruise.  It was commentated, and there really was so much more about Utrecht than I could have imagined.  I knew there was serious history there.. but to actually find out that the Treaty of Utrecht actually settled the war of the Spanish succession….  whoa.

Our adventures in Utrecht continued on foot and we really enjoyed seeing the amazing architecture and features of the city streets.  Much like Paris, the streets were very romantic.. if that’s not a silly description.  I just remember feeling so blessed to simply BE there.  Even the streetlights and awnings were of great interest to us. 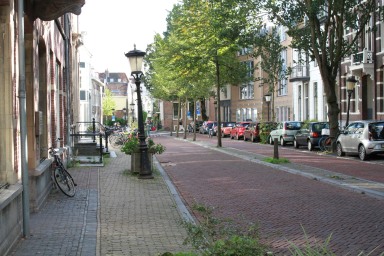 We did indulge ever so slightly, and have some Stroopwafels at a food stall in the city.  I’d heard about them in passing through my sister and her in-laws.. but I’d never had them.  In my very un-dutch opinion, I’d probably say they are halfway between a sweet biscuit and a pancake.    I think they’d get kinda sickly if you ate more than one.. but hey, maybe that’s just me.

Venturing into the main shopping centre at Utrecht, I did manage to see a $700 pair of sneakers, that, quite frankly, were the most ridiculous things I’d ever seen.  ha ha.

On making our way back to Nieuwegein, we saw lots of the surrounding areas, different types of housing, etc etc.  It was really quite interesting to see that nearly ALL of their housing is what we would call townhouses.  Only the very rich live on standalone houses with yards or property surrounding them.     As so many people get around on their bikes in Europe, it was really interesting to see some of the different variations to accomodate those with kids/babies.  Seeing a literal enclosed capsule baby seat sticking out from the front of a bike was quite bizarre for me.. but is clearly very common there.

We picked up some really yummy… and I mean CRAZY YUMMY Lebanese food to take home for dinner.  It was honestly so good… and other than kebabs, which are one of our fave quick meals out, I would never think to get Lebanese.  Another great experience had as part of our Europe 18 adventure.

After such a great day, delicious dinner, and once again, great company, it was easy to head off to sleep, in anticipation of a great day ahead come tomorrow.  I was starting to feel a little yucky and ‘headcoldy’ by the evening though, so that also made bedtime very welcome.

Saturday morning dawned … and my head wasn’t feeling fab.  Another of my sister’s in-laws were due to pick us up mid morning as we were spending the weekend with them.  There were some pretty exciting plans in place …  Volendom & Zaanse Schans being the major two.  Both of these were full day trips.  I seriously struggled my way through Saturday as my head cold was getting worse and worse by the second.  I did still manage to enjoy some Olie Bolen, which is a much loved Dutch recipe that is only had on special occasions.  I think my sisters Father-in-law would make it each New Years.  There was an annual festival on at Volendom, which is the only reason we had it at this time of year. It was quite delicious…. much like a doughnut… probably just as unhealthy as a doughnut.. LOL.

I was VERY keen to get back to their place and get to bed as I my head literally felt like it was going to explode.. fun times.  There was a dinner on that evening where quite a few of the relatives came, but I completely missed the entire thing… hopefully they forgive me for this.  The full 12hrs sleep (& the constant Panadol & nurofen) did really help me though, as I did feel a lot better when I woke up on Sunday morning.  We went for a walk in the nearby reserve area with their dogs, which was fun.  It felt good to do a ‘normal family type thing’. 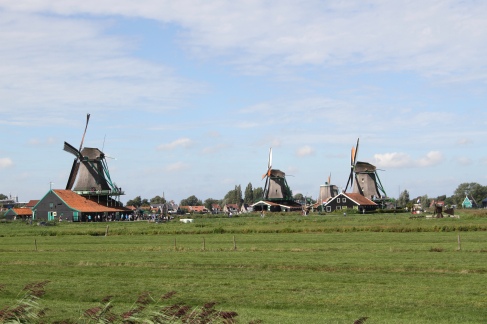 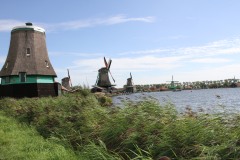 Seeing the windmills was really a highlight, so I was so glad to feel more up to the day.  I finally felt as if I could actually engage with our friendly hosts…..  they probably thought I was quite the rude Aussie up to this point.  We enjoyed a nice lunch while we were there.. and then the journey home, seeing more interesting things along the way.

The daily, sometimes more than a few times daily, contact with my family at home was making things so much easier to be so far away from them.  I really wanted to include them in as much of my trip as I could.

A lay in the hammock, some more drugs, the beginning of a copiously large dose of Vitamin C, and some insanely delicious zoodle bolognese topped off a fantastic Sunday.

The week ahead was looking amazing….  so see you in the next blog !!!!