Friday was a day we’d been quite looking forward to, as we were heading on a lil road trip with San, to Giethoom.. the town with no roads, only canals… and then onto the Afsluitdijk… and then back home again…  a round trip of about 3hrs non-stop, but we pretty much took the entire day.

Geithoom first…  it was pretty fascinating to see a town (I’d more call it a suburb really) with literally no roads… you have to take a boat to go anywhere.  Due to the close distance between waterways and houses etc, boats that are called ‘whisper boats’ are predominantly used.  You can also choose to explore on a canoe, but we decided against that and paid the small fee to be shown around via tour boat, similar to the boat we went on for the Utrecht canal cruise.  My sister even got to have a turn at driving the boat, which was fun for her.

It was very fascinating to imagine living like this… going to school, bringing groceries home, coming home from something late it the evening etc ..

The Afsluitdijk was really interesting to see.. and also very COLD & WINDY !!!  We stopped and had a look at the small museum and viewing platform on one side of the crossing , and then there’s an area you can stop and take pictures etc halfway across.

The road trip itself was so fascinating.. I’ve never seen a wind farm before, and there were sooooooo many.  I found that really encouraging.  Also, seeing so many fields separated from each other, and the road, by small canals, rather than fences.  Such a great idea !!

Another delicious meal and some fantastic chat time wrapped up yet another great day in the Netherlands.  Saturday was to be quite a full day, so we were up reasonably early to head off to explore De Haar Castle.  It was impressive even before you made you way into the grounds…  very ‘castle-ish’ is the best way I can describe it. 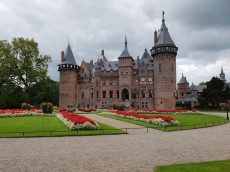 Our next stop after the castle was visiting an in-law relative of my sisters. I had never met her before, but it was still interesting as it gave another insight into different living styles etc in The Netherlands.  Following that visit, we went to have lunch at Zeist, which was really enjoyable.   I think I had an almond chai latte there… but it wasn’t super fab.. however the food totally made up for it.  I really loved the cup and sauces, to the point where I investigated as to where I could maybe buy some. 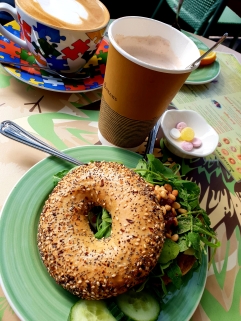 Our next stop was an amazing delicious family dinner at Sandra’s sister’s place at Breukelen.  It was really a great meal… yummy salads with great homemade dressings..  plus yummy chicken…  I’m a bit of a chicken fan, I must say.  What was more interesting about this visit though is that their ‘house’, which once again I would call a townhouse complex, was more than 100yrs old…. ARE YOU KIDDING ME…  anything that old in Australia basically gets torn down and re-built.  Might say something about the different building standards perhaps ?

OK…. that was the end of another fantastic day in the NL !!